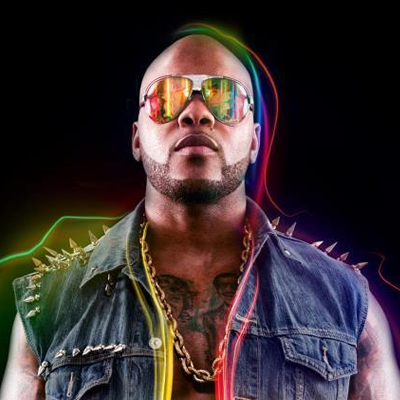 Atlantic and Poe Boy Entertainment Group Recording Artist Flo Rida stormed into the European charts with his debut single "Elevator" featuring Timbaland in 2008. Over the last several years, Flo Rida has pulled off a pretty neat trick. Not only has the Florida-born rapper become a chart fixture thanks to the blockbuster singles “Low (feat. T-Pain),” “Right Round,” “Club Can’t Handle Me,” and his most recent chart-topping hits, “Good Feeling” and “Wild Ones (feat. Sia),” he’s also broken down barriers by uniting millions of fans of pop, hip-hop, and club music around the world and establishing himself as an international, genre-busting superstar in the process. Flo Rida brings his experiences traveling the globe to his fourth album, Wild Ones. “Over the last few years, I’ve been everywhere — Africa, Japan, Greece, South America, Russia, the Middle East, Australia, India, Singapore, Indonesia, Malaysia, The Philippines, and all over the United States and Europe,” Flo says. “You name it, I went there. I got to go to the best clubs and the most extreme parties and that really influenced this album. With this album, I definitely feel like I have to show people that I’m the life of the party.” Songs like the “Good Feeling” and “Let It Roll” are addictive, upbeat party jams. His newest single, “Whistle,” opens with an acoustic guitar and infectious whistle chime, already proving to be the song of the summer. Jennifer Lopez adds her sultry vocals to the club-ready “Sweet Spot,” and Redfoo of LMFAO helps keep the party going on the bonus track “Run.” “On each album I try to show a lot of versatility, but every time it’s going to get bigger and bigger, because there’s no way I can give my fans the same old thing.” Wild Ones, is an envelope-pushing collection of party-friendly anthems that showcases Flo Rida’s signature stop-and-go flow, melodic sensibility, massive hooks, and billion-dollar beats, as well as his clever lyricism. “I like to sit down and come up with a melody first, before I even apply the lyrics,” he says. “Because when you’re creating a track, you should become an instrument, not just rap over a beat. For me to connect with a track, it has to be soulful.” To tap into that soulful vibe, Flo Rida collaborated with a host of A-list songwriters and producers, including Dr. Luke, Goonrock, Sia, Rico Love, DJ Frank E, Axwell, The Futuristics and SoFly and Nuis. “I’m very particular about who I work with,” Flo Rida says. “They don’t have to be a huge name, but I have to feel like they’re bringing something that’s outside the box.” He may be surrounded by star power, but Flo Rida proves that he is one-of-a-kind on Wild Ones. Born Tramar Dillard, Flo Rida was raised by a single mother in Miami’s rough neighborhood of Carol City.